Mercedes-AMG says it has achieved the seemingly impossible triple act of increasing the performance, response and durability of its new 2.0-litre four-cylinder petrol engine – and it has presented data to prove it.

When it revealed the world’s most powerful four-pot production engine last week, questions were asked about the M139’s reliability and turbo lag – traditional byproducts of high boost pressure, which in this case is as much as 2.1 bar or around 30psi.

But in a special presentation to Australian, British and US journalists, Mercedes-AMG’s head of engine development Ralph Illenberger revealed graphs showing the M139 has much fatter power torque curves than the M133 it replaces.

As we’ve reported, AMG’s second-generation ‘45’ turbo-four, which sets a new specific power output record for a turbocharged engine at 155kW/litre, will debut in the new A 45 hot hatch and CLA 45 sports sedan next month, packing up to 310kW of power and 500Nm of torque in S form. 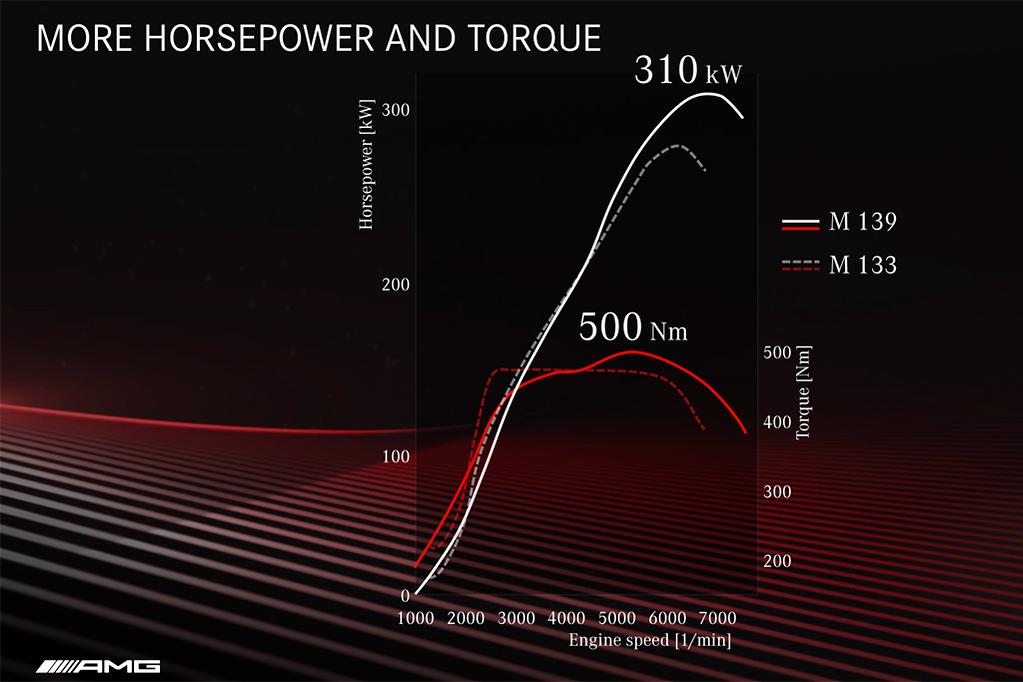 “The torque curve is improved. The old one was flat and like a diesel. The new one offers more torque at lower rpm – it’s no longer flat but shaped,” he said.

“There’s pretty good acceleration at 1500rpm. Acceleration at 3500rpm is much better. You’ll notice improved driveability and it revs further too.” 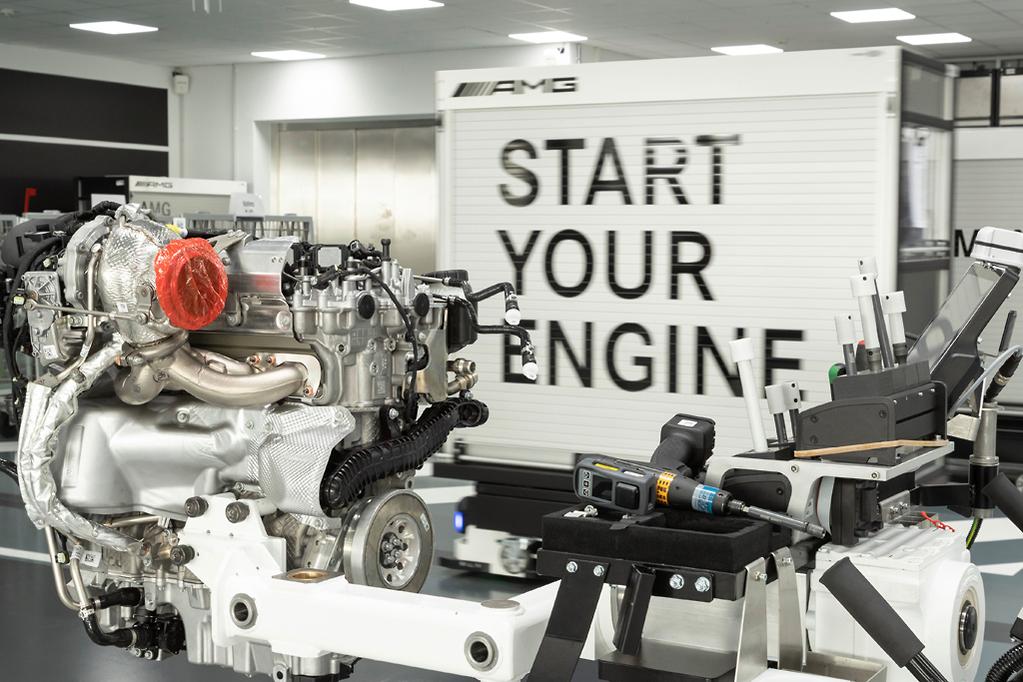 At 160.5kg, the M139 weighs around the same as the M133 -- the world’s most powerful production four-cylinder when released in 2013 -- and benefits from a host of new technologies to improve performance.

These include a bigger single twin-scroll turbo with roller-bearing compressor and turbine wheels, allowing it to spin faster up to 169,000rpm, and new ‘torque filling’ measures such as an electronic rather than pneumatic wastegate that allows more precise and flexible boost pressure control, plus direct and manifold injection (the latter via solenoid valves at higher revs). 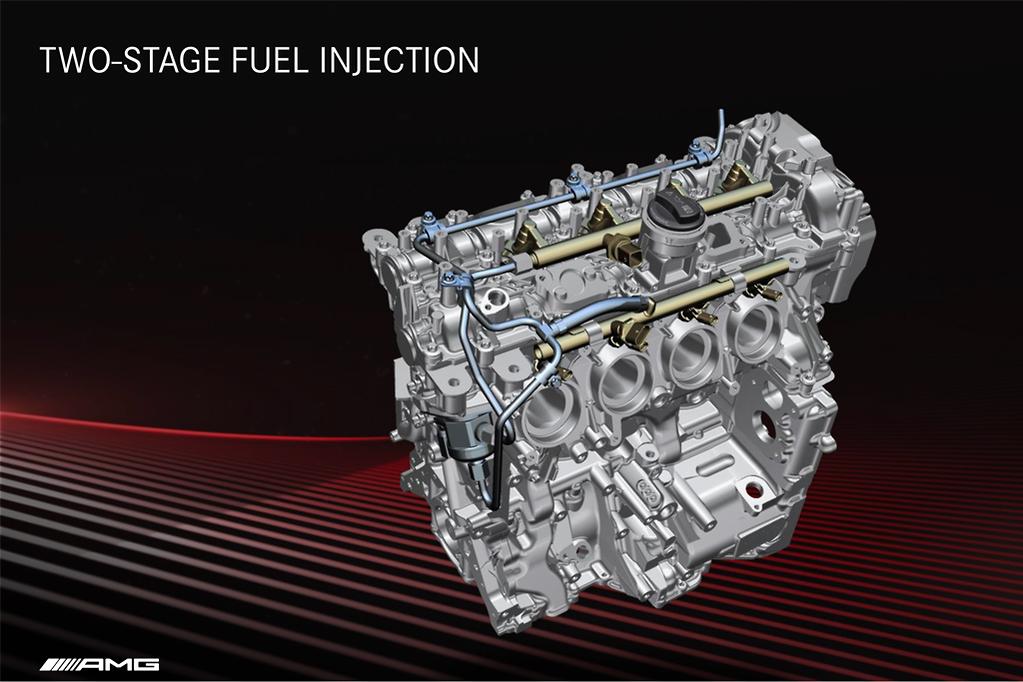 Flipped 180 degrees in its engine bay, with the exhaust manifold and turbocharger now at the back of the engine against the firewall, the M139 also has a lighter forged steel crankshaft, forged aluminium pistons, new piston rings, bigger exhaust valves and Nanoslide cylinder coating.

Meantime, durability enhancing measures comprise a chill-cast closed-deck aluminium crankcase that can withstand combustion pressures of up to 160 bar, thicker cylinder walls, baffle plates designed to reduce oil sloshing in the sump, new oil-cooling system and an on-demand electric water pump than can circulate 280 litres of fluid per minute.

Running on 0W20 oil (yes, you read that right), it comes with the same long 20,000km/12-month service intervals as before and was subjected to the same durability test schedule as all Daimler engines, as well as AMG’s additional development protocols.

The M139 meets emissions legislation in every market it will be sold, and efficiency measures include electronic alternator management, ECO idle-stop function with fast restarting, gliding function and a petrol particulate filter – but not for the Australian or US markets. 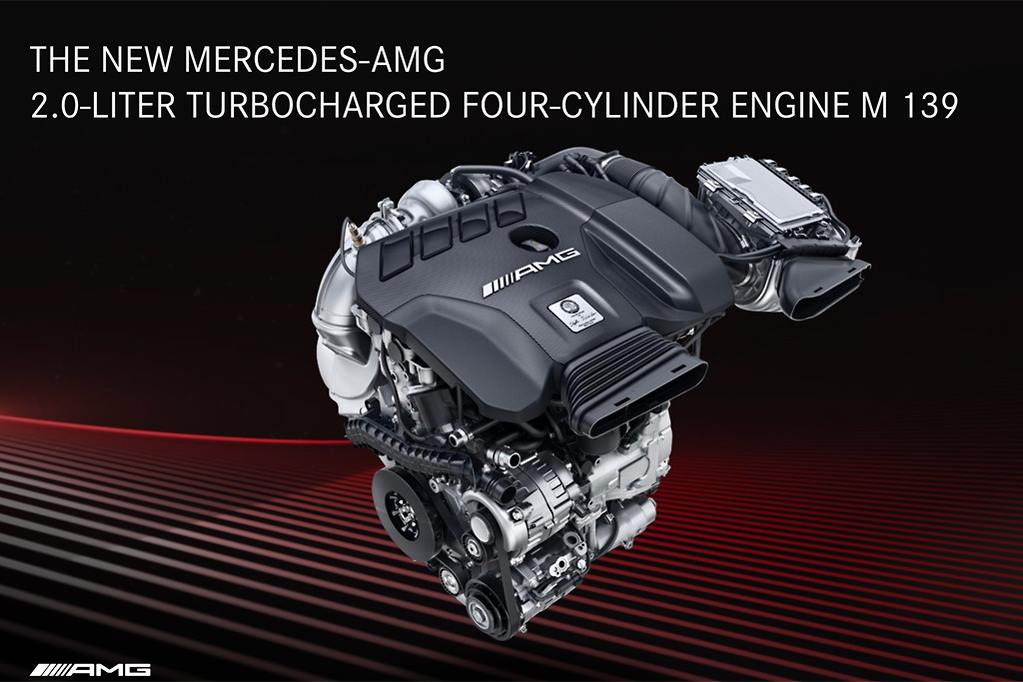 Following an undisclosed investment in an all-new four-cylinder engine after six years, Mercedes-AMG’s four-pot is produced at the company’s Affalterbach facility in Stuttgart for the first time, in a completely new production process that meets the 4.0 industry standard.

It’s assembled entirely by hand using wireless, WLAN-connected and data-recording torque tools in AMG’s ‘one man, one engine’ tradition, in which one master craftsman is responsible for each engine and applies his name to it.

After two to three years of AMG engine training and further specific training of one to two months, each master technician and their engine stand is followed across 16 stations by an autonomous shopping trolley, in which every engine component is pre-loaded in sequence.

Each engine is produced in less than two hours (about half the time of AMG’s V8) and the number of test stations was reduced by grouping several individual stations into three central stations: the drag torque test, oil/coolant leakage test and fuel system check.

As powerful as it is, however, Illenberger said AMG’s four-cylinder engine still hasn’t yet reached the pinnacle of its development.

“There will be more to come,” he told carsales. “There’s always room for improvement. But 421hp is really quite a high number, especially when it’s also street-legal.

“That was the challenge. We’ll see what the future will bring.” Written By